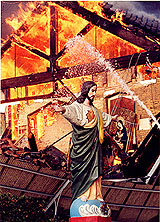 Kobe City is located in the Southern region of Hyogo Prefecture in Japan. Many foreign people live in Kobe including Koreans, Vietnamese and Filipinos. FM YY is situated in Kobeﾕs Nagata-Ward, where people from approximately 28 different countries (mainly from Asia) live.

On January 17, 1995, Kobe was hit by the Great Hanshin-Awaji Earthquake.
This earthquake resulted in the significant damage to the lives of minority people in the area. The earthquake of 7.2 magnitude took the lives of more than 6,400 people. Many foreigners greatly suffered, and a large number of them died. Many of those who survived had homes that were destroyed and therefore, had to seek refuge in shelters. Furthermore, many foreigners who lived as residents in the community suffered more than the Japanese as a result of the language barrier, the lack of accessible information and systemﾕs neglect.

Communication was difficult for the foreign community because of the language barrier and many were unable to receive necessary information. Ｆoreigners were in a very vulnerable position. The system was insufficient able to support the foreign community before the earthquake hit. Thus, when the crisis occurred, these problems became urgent. A number of Nagata residents observed this problem and came together to improve this situation and help the foreign community. Thus, they established the multicultural/multi-language radio station, FMYY.

These residents were initially Korean people who had an established radio station called FM Saran (Saran means “love” in Korean) in Ikuono-Ward of Osaka. This radio station broadcasted to the Korean Community of this ward. Two weeks after the earthquake, on January 30, 1995, they brought their broadcasting equipment to Kankoku Gakuen (a Korean culture school), a short distance from JR Shin-Nagata train station. Here they set up a small FM radio station that was named FM Yoboseyo (Yoboseyo means “hellow” in Korean). They broadcasted earthquake information in Korean and Japanese. Furthermore, they aired Korean music three times a day (morning, afternoon and evenings) to the local community that was coping with the aftermath of the earthquake. The teacher of Kankoku Gakuen and fellow volunteers took turns day and night to make sure that the broadcasting continued in order to offer encouragement to the Korean victims of the earthquake. The original purpose for broadcasting in Korean came from a strong desire to communicate with first-generation Koreans in their own language since Japanese was not their native tongue.

Vietnamese people also suffered a great deal as a result of the earthquake.
Many Vietnamese who had arrived in Japan as refugees lived in Nagata.
They worked in the chemical shoe factories. The chemical shoe factories
were regarded as the local Korean industry since a large percentage
of the local shoe industry was owned and operated by Koreans. Vietnamese
also lived in low-income apartments. When the earthquake hit, the shoe
industry suffered a great deal. Thus, Vietnamese people lost both their
homes and their jobs.

Most of the Vietnamese victims of the earthquake took refuge in parks
and school buildings. Due to the language barrier, their lives in these
shelters were filled with both anxiety and insecurity.

A support network grew from volunteers who came to assist Vietnamese
victims at Takatori Catholic Church. Many Vietnamese were members of
this Catholic Parish prior to the earthquake. They translated earthquake
information into their mother language and delivered it to the Vietnamese
people taking shelter in schools and parks.

On April 16, 1995, in order to provide necessary information and encouragement
to Vietnamese victims, with the help of FM Yoboseyo and FM Saran, a
mini FM radio station was set up on the ground of Takatori Church. The
Vietnamese Aid Committee was at the core to the establishment of this
new radio station that was named FM Yumen (Yumen means “friendship”
in Vietnamese).

FM Yumen broadcasted programs from 7:00 AM until 1:00 AM the following
morning. The radio station not only broadcasted in Vietnamese, but also
in Tagalog and English for the Filipino community, Spanish for the South
American community as well as Japanese for the wider community ﾐ a total
of five languages.

The main content of the station was earthquake information, music from
those countries and comical relief. For those minority victims who were
living in tents in the winter cold without light, the sound of their
own language broadcasted over the radio helped to ease their suffering
hearts.

FM-Yoboseyo and FM-Yumen had common goals. Not only did these two mini-stations
want to provide information in various languages in times of emergency,
but they also wanted to create a lively community in Nagata where multiculturalism
and multi-ethnicity could co-exist. In order to work towards achieving
these goals, it was necessary to establish a local radio station. On
July 17, 1995, half a year after the earthquake, FM Yoboseyo and FM
Yumen joined together to become a single radio station. The new station’s
name became “FMYY”. The name was derived from the initials “Y” of both
“Yoboseyo” and “Yumen” in the hope that an increasing number of people
would become connected through the new radio station.

There was one hurdle that FMYY had to overcome in order to become a
community radio station. The mini-stations, FM-Yoboseyo and FM-Yumen
were born form the necessity of post-earthquake support. In order to
establish a community radio station, they had to obtain a community
broadcasting station license from the Ministry of Post and Telecommunications.
Steps were undertaken to acquire a license. A new studio was built by
volunteers at the Takatori Relief Base (Takatori Church). The construction
materials and equipment came from disaster relief aid and donations.
Furthermore, there was an enormous amount of paperwork required for
a license that had to be completed by the staff at the time. The Department
of Post and Telegraphs were responsive to the great load that FMYY had
to take on in order to become an established radio station and thus,
took a more flexible attitude toward the process. With this progress,
the goal of officially opening the radio station was set for January
17, 1996 ﾐ exactly one year after the Hanshin-Awaji earthquake hit.

As planned, on January 17, 1996, the multicultural/multi-language community
radio station “FM-YY” was officially opened. Chinese had been added
to its list of languages and later in April of 1996, Portuguese language
programs were also introduced for South American listeners. This brought
a total number of eight broadcasting languages to the radio program.
Presently, through the work of Japanese and foreign volunteers, FMYY
broadcasts programs from 7:00 AM until 12:00 midnight. It provides information
on disaster relief, local news and everyday life as well as introducing
foreign cultures to the community.
At the same time that FMYY became an official radio station, it also
became a limited company. This was necessary in order to continue broadcasting
into the future and to acquire stability. Despite its company status,
all of the approximately 150 staff running the station are volunteers.

Other community support groups that had developed from the same Takatori
Relief Base as FMYY continued to support the reconstruction and reorganization
of the radio station. These groups developed into the Takatori Community
Center. One such activity that the groups promoted was assisting children
with diverse cultural backgrounds to express their views in order to
create a more vibrant and richer community. In present-day Japanese
schools, foreign children tend to have a difficult experience because
they seldom have an opportunity to express themselves. Furthermore,
many adults around them do not seem to notice this problem. With the
use of video cameras and the support of young adults, these children
are able to express themselves on film and pass their message on to
others.

In May of 2005, Takatori Catholic Church went under reconstruction.
FM YY and all of the other groups in the Takatori Community Center had
to move their activities to a nearby shopping arcade. In the past two
years of construction, FM YY has together with the multi-cultural community
center, gradually made progress as a growing form of media.
FM YY is not only in operation for the single purpose of connecting
the Japanese and foreign communities. It also works to support elderly
and handicapped people, as well as people who have their roots in the
Okinawan and Amami Islands. FMYY works to promote a society where all
people accept each other, support one another, and live together to
create a greater and richer community.
In the days after the Great Hanshin-Awaji Earthquake, there were Vietnamese
people who shed tears when they heard their own language coming from
the radio. Within these tears were the unspeakable hardships they had
suffered as they had crossed the seas as refugees to Japan. FMYY has
been working for over 10 years and will continue into the future to
pass on the message that we as diverse people can create a multicultural
and multiracial society.