On the first and second Saturdays (2nd and 9th April) from 4pm to 4:30 in Japanese and from 4:30 to 5pm in English, KIC students from Africa share their stories about what has surprised them once in Kobe, Japan, what they have found out through their life there, and other things they found intriguing and mind-blowing in Kobe or in Japan in general.
On June program, as usual, explores about the countries which our guest students come from.
And they are talking about differences in cooking methods between Japan and their countries. 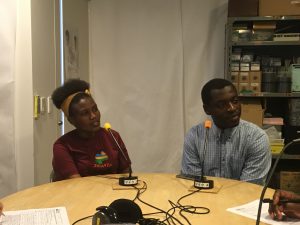 In this month, our guest students from KIC are Ms. EMERA Ines (on the left of the photo） from the Republic of Rwanda and Mr. NYIRONGO Mwila (on the right of the photo) from Republic of Botswana. 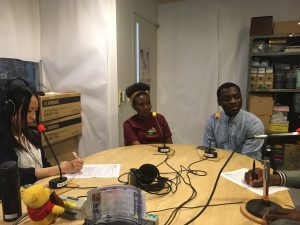 They are with our regular personalities, Ms. Funayama (Left photo: Having worked in multiple African countries) and Prof. Nsenda (Architect originally from Democratic Republic of Congo and graduated from Kyoto university graduate school).
They are talking about differences in cooking methods between Japan and their countries. 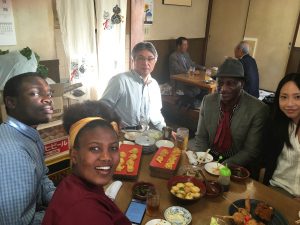 As usual we went to a local restaurant near FMYY.Today AKASHIYAKI,It’s like TAKO-YAKI,but more softly.